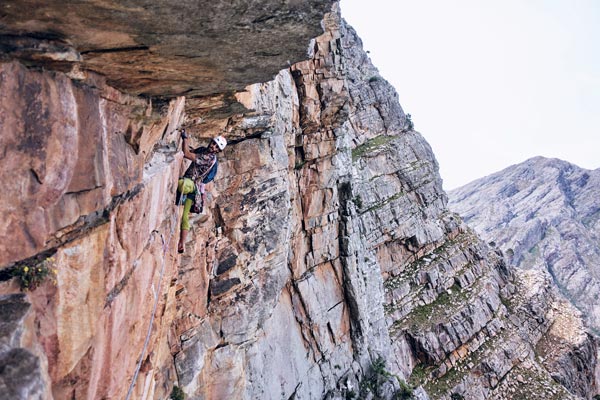 At last the record can be set straight. The Barley brothers (Tony and Robin) generously let me get the credit for this amazing route, but really it was Robin’s brainchild. The two brothers, from the UK, were superbly bold climbers, and highly motivated. They inspired a number of plodding South Africans like myself, to pull out the stops and see what we could do.

Apollo is on the central turret of Castle Rocks in Mitchell’s pass. The peak is an outlier of the majestic Hex River Mountains near the town of Ceres, and stands proud above the cool pools of the Witels gorge. The route is a daring line through serried bands of red overhangs at mid-height (about 120 metres up), with the key breaks only just coming at the right places. Above this is a huge triangle of grey slabs, which funnel into a groove cleaving the summit walls. The eventual climb was an incredible breakthrough, with exacting, strenuous moves in spectacular positions.

The story of prospecting the intimidating and unclimbed expanse of overhanging hard red, brown, and yellow rock on the Central Turret really starts with the opening of Via Centrale by Inglis, Schoon, White and Williams in 1961. It was the first aid route on this wall, and demonstrated the exceptional quality of the rock, and that ways could be found through the big overhangs, especially if climbers were able and prepared to resort to the still controversial use of pitons!

Attempts on the big amphitheatre to the right of Via Centrale started during the Apollo 8 moon shot, and ended four Apollos later, so the choice of name for the route was going to be obvious. However, in the meantime, it was referred to as one of the Cape’s LGPs (last great problems).