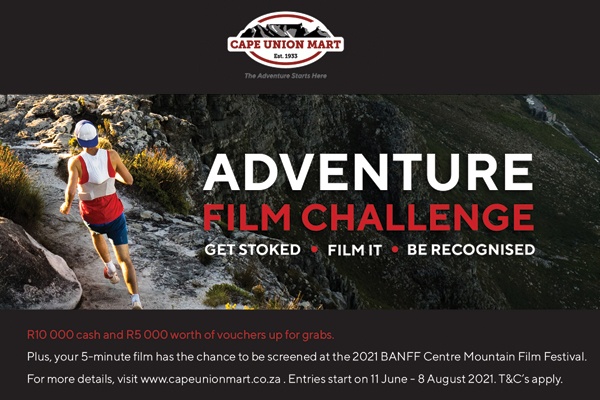 Gear up and show off your filmmaking talents

South Africa is a dream location for filmmakers wanting to capture the majesty of the outdoors juxtaposed by the grittiness of urban living. That said, young, local talent in South Africa often struggle to find a platform to showcase their work and get noticed in the industry. In a bid towards nurturing our country’s exceptionally talented young artists, aspiring and professional adventure filmmakers are invited to grab their cameras and celebrate our beautiful country and the spirit of our thriving outdoor culture. Create something visually stunning that captures your most epic adventure outdoors and be recognised on the world stage – the international BANFF Centre Mountain Film Festival.

We’ve been locked up for so long, but now is the time to get out there and capture the incredible landscapes, vistas, and natural beauty of South Africa. Cape Union Mart is on a mission to showcase the beauty of South Africa through a lens and nurture young talent in the country. The brand’s Adventure Film Challenge (AFC) is back as of Friday, 11 June 2021, providing up-and-coming and experienced filmmakers with a platform to show off their best work, showcase their talents and get industry recognition to boot.

A platform for young, local talent

In its 8th year, the AFC encourages filmmakers to gear up, explore our natural landscapes and show off their talent. Says Odile Hufkie, Marketing Manager at Cape Union Mart, “Our brand is not only about providing consumers with the gifts and gadgets to explore the outdoors. We also understand and support young and old souls in the field of adventure filmmaking and want to give them a creative platform to share their experiences with us and the rest of the world.”

She continues, “This campaign not only highlights some of the best filmmakers in the business but also shines a spotlight on the incredible beauty our country has to offer right from our doorsteps.”

All film submissions will be judged by a panel of external and esteemed judges, all of whom are involved in the outdoor film scene in South Africa, including Jacques Crafford, landscape and travel photographer, and last year’s AFC ‘Professional’ winner. Joining Crafford on the judging panel is Ofentse Mwase, award-winning cinematographer and business owner, and Faine Loubser, who worked on the Oscar-winning Netflix original ‘My Octopus Teacher’ as the official GoPro operator.

“We take great pride in providing entrants with many opportunities to get recognised by the best in the industry. Our panel of judges are just that and come from varied backgrounds, all offering a unique perspective of what it means to capture something truly breathtaking and authentically South African that speaks to the audience,” Hufkie adds.

Submissions will be judged on factors like the storyline, creativity, originality, visual composition, and technical execution, along with editing, sound, music, and overall impression.

Recognition on a world stage

The BANFF Centre Mountain Film Festival is one of the largest mountain festivals in the world. Taking place annually, the festival draws some of the world’s best filmmakers and accomplished outdoor heroes to celebrate adventure, the environment, mountain culture, and the outdoors through film.

In addition to the opportunity to be featured in the BANFF Centre Mountain Film Festival screened in South Africa, ‘Professional’ entrants will be competing for a cash prize of R10 000 and R5 000 worth of in-store gear, while ‘Aspiring’ filmmakers are vying for R5 000 worth of Cape Union Mart gear.

Films must be no longer than five minutes (300 seconds), including titles and credits. ﻿To be suitable for cinemas, all videos should also be shot at HDTV resolution (1920 x 1080) at 25 or 50 fps. To enter, simply submit your final short film on www.capeunionmart.co.za by Sunday, 8 August at 12h00.