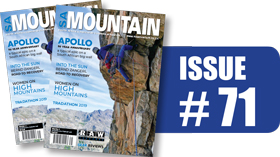 I’m sitting at my desk, just barely able to contain my anger and outrage at the senseless cold blooded murder of one of South Africa’s most motivated, dedicated and talented climbers, David Wade – friend, son, brother and partner – loved by so many.
Just 24 hours before I wrote this, I sat in a pub watching South Africa narrowly beating Wales in the RWC semi-final. The final whistle blew and we all erupted in joy. Five seconds later I checked the Facebook feed on my phone and a post by Kent Jennings jumped out at me. I couldn’t believe what I was reading. David Wade dead? What? How? I felt empty and detached from the raucous crowd around me and ran out into the cold Cape Town rain. It must’ve been a climbing accident, I thought. My heart was in my throat as I looked for Kent’s number on my phone and pushed call.
Shot dead? I heard the words, but refused to believe it. Jesus! How the f….? Then Kent briefly filled me in on what happened – a robbery raid that went horribly wrong at the Tranquilitas campsite in Boven. A place practically every climber in SA has been to. A place I had been to just a few months ago. A place we all have fond memories of. And now this!
After the call, I kept on going over and over in my head, the words that I had just heard on the phone. It was a strange sensation of disbelief, devastation and helplessness, which gave way to a deep anger and frustration. And it was so bloody FINAL!
I never knew David personally, but over the years I had had numerous interactions and communications with him on email, text messages and the odd phone call. From the very start he struck me as a driven young man and always keen to help. His first contribution to SA Mountain was an article called ‘The Wall’ about this huge wooden outdoor climbing wall, over 10 metres high, that he built in his back garden. He was so amped about it and so proud of his creation. That appeared in the March issue of 2012. Since then David has always kept me in the loop if he did anything significant, or had good pics to share, of which there were many.
Then just a few months ago I got this excited email from him about his send of Rodan, a beautiful route up one of Boven’s most intimidating orange walls, and at the hefty grade of 33, one of South Africa’s most sought-after test pieces. He was immensely proud of this achievement and rightly so, and upon request, sent me a short story and some amazing photos of his incredible journey to climb this route. The pics were so good that I immediately earmarked one of them for the front cover, which I feel is one of the best SAM covers ever.
David had been climbing for almost exactly 10 years when he was so tragically taken from us. Ten years that saw him rise to very top of the climbing ranks in South Africa. A more dedicated and passionate climber would be hard to find and in time I can only imagine David would’ve gone on to much bigger and greater things. Now sadly cut short by a terrible and unspeakable tragedy, we have lost one of climbing’s most unassuming and loved characters.
Farewell David. The crags will be a poorer place without your presence, and the climbers who loved you will be at a loss without your companionship and your endless enthusiasm.
Our deepest condolences go out to Lindie and all of David’s family. And to all his friends and climbing mates. This is indeed one of the saddest moments in the 18 years of SA Mountain’s existence, and one of the darkest, most depressing and heart breaking times in South African climbing.

Tread safely into the hills
Tony

INTO THE SUN
An Accident, the Healing and a Miracle
by Bernd Zangerl

MY 9 PEAKS CHALLENGE
An ascent of the 9 highest peaks across the 9 provinces of South Africa . . . or so we thought!
by Alda Waddell

ON TOP OF THE APPLE TREE
A new and unusual route on the Heiveld Arch, Houdenbek
by Fredy Mohorich