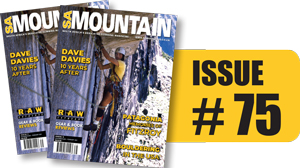 Are you a wimp or are you Polish?

Just this past week I finished reading Winter 8000 – a remarkable book by celebrated author, Bernadette McDonald. It is a collection of unvarnished tales about the savage existence in the Death Zone in winter, the race to climb all 8000-metre peaks in the cruellest and coldest season.
But I’m not going to talk about the book here, as you can read the full review on page 35. What I am going to talk about are the remarkable Polish climbers.
For some reason, Polish climbers seem to have a special neurological compartment tucked inside their brain that allows them to endure the harshest, cruellest, and most merciless conditions that any weather gods can throw at them. They have the ability to push on in conditions where anyone else would be retreating at haste with their tails tucked firmly between their down padded buttock cheeks.
Polish climbers and mountaineers have always impressed me, and many famous Polish names are inexorably linked with ascents of 8000-metres peaks, in summer, winter, new routes, solo ascents. Big names like Jerzy Kukuczka – the second person to climb all fourteen 8000-metre peaks (after Reinhold Messner), most of them by new routes and some in winter. Voytek Kurtyka – one of the pioneers of alpine-style climbing in the Himalayas and frequent partner to Kukuczka. Krzysztof Wielicki – who also climbed all the 8000ers, including first winter ascents of Everest, Kangchenjunga and Lhotse, the latter solo, which is quite a remarkable story in the book. Wanda Rutkiewicz – one of the greatest female high altitude climbers of all time, having climbed eight 8000-metre peaks and making the first female ascent of K2, before disappearing on an attempt on Kangchenjunga in 1992.
There are many more brilliant and legendary Polish climbers, and their achievements are astonishing, to say the least. I assume many of us already know this. But the true extent of the inner strength of Polish climbers really only sunk in properly when I read Winter 8000. The Poles were responsible for the first winter ascents of the first seven 8000-metre peaks. But let’s just clarify a few things: The Poles were the outright pioneers of Himalayan winter climbing, particularly on 8000-metre peaks. They worked on very low budgets, so equipment was often not of the very best. They climbed these giants in unspeakably savage conditions – temperatures of -50 ˚C, terrible winds, constantly well over 100 kph, no supplemental oxygen, no Sherpa support on the mountain, often in semi-alpine style, forced bivvys at 8000 metres and sometimes higher. All this while venturing into a realm that no one even knew was possible. Yet they persevered, and much more than that, they were successful, and showed the rest of the world what was possible.
Big respect and hats off to these Ice Warriors – mountaineers and climbers of exemplary courage and skill – absolute masters of the seemingly impossible!

CLIMBING WITH DAVID
by Tony Dick

PATAGONIA – MEMORIES OF FITZROY
by Hennie Niemand and Colleen Thiel

BACK PAGE STORY
Vulture ringing and near death – Klein Karoo-style, 1984
by Keith James