Fernwood for the People 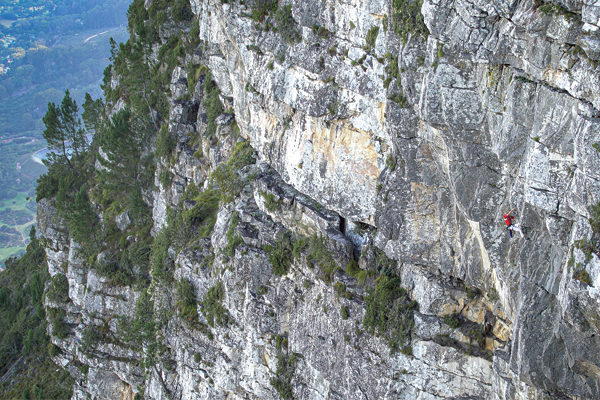 An extraordinary adventure in the middle of a city.

With a cord around the little pine tree protruding over the edge, we leaned out over the 350-metre overhanging wall that is Fernwood Face, and started down on our first abseil. Our next abseil was off a prickly Cliffortia ruscifolia (or ‘climber’s friend’), which took us further down the undercut cliff. By placing numerous pieces of gear we were able to ‘keep the ropes in’ and we landed on the long thin ledge known as the Traverse of the Eagles.
‘Okay’, Tinie said, ‘What do you want to do? Pull the ropes, or top-rope out?’
I took a good look at the wall, took a deep breath and said, ‘Pull the ropes!’
One hundred metres of rope cracked down into space and Tinie said, ‘Let’s go then.’

We had an exceptional 17 December in the depths of the second Covid wave. The 50-metre headwall of Fernwood Face was stupendous. The wall is overhanging, the rock is fantastic, the situation is incredible, and this was virgin territory for humankind. At 350 metres, the wall is huge, but the very steep slopes below the wall enhances the exposure dramatically. Our headwall outing was brilliant and we went home delighted with our adventuring and very excited about what we could discern about the wall below us.
On Christmas Eve we were back. This time to abseil the whole wall for a close and critical inspection. We made it down before curfew. On 6 January we again abseiled the wall and worked out climbing lines. Two days later we were back, hiking in from Newlands to do a ground-up first ascent – the day before we’d had a huge fight about committing/not committing to a night on the wall.