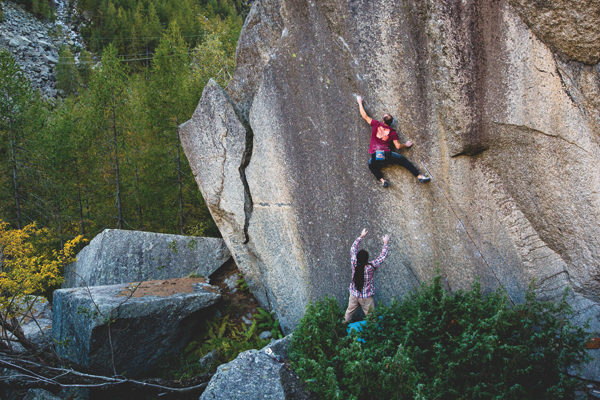 Finally, Fred and I arrive. We haven’t seen each other for a while, so it’s even nicer to explore a new place with the potential for new bouldering together. Curious and excited, we stare out the windshield of the warm Hyundai bus. Secretly we hope to get an early glimpse of the rocks from the car.
The headline ‘The little Yosemite of Europe’ (Klettern Issue, 1994), which brought us here to Piedmont in Italy, is really very promising. A short time later, our wish is granted, and we are able to inspect the first boulders a ‘mat’s throw’ away from the old road. Fred and I stroll to some boulders and are surprised to find no visible traces of chalk on them. Time and again, we stop and marvel at the geomorphology of the valley. A granite dream come true. Steep rock walls fissured with spectacular waterfalls. The force and power of nature are omnipresent, and nature lovers are rewarded with breath-taking views of the high alpine scenery. Already in the ’70s and ’80s, Valle Dell’ Orco was a popular meeting place for the climbing scene of that time. Legends such as Jim Bridwell and Patrick Edlinger have made adventurous first ascents on the walls of the Corporal and its smaller brother, the Sergent. Clean climbing at its best! Later, with the emerging sport climbing movement, the valley fell into a deep slumber. Not even visits by Maurizio Ovigilia, Marco Bernardi, Didier Berthold, or Mr Honnold were able to change this.