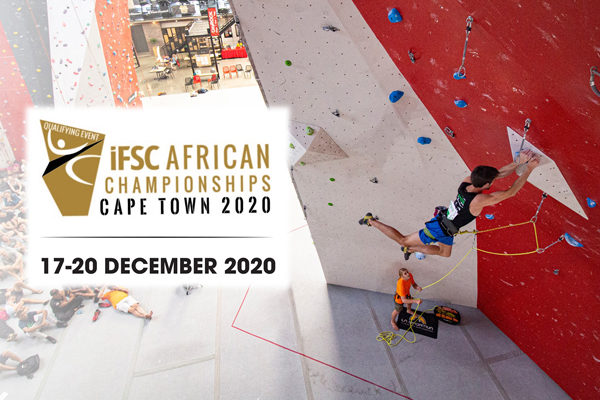 “Years from now, people will look back on the 2020 IFSC African Championships in Cape Town as a fundamental milestone in the development and growth of Sport Climbing in Africa. The Sport Climbing family once again displayed its fierce commitment to the sport by uniting to overcome adversity. The IFSC would like to thank the City of Cape Town and the entire local organising committee for never losing confidence, for always believing and for finally delivering this historic Olympic qualification event.” says the International Federation of Sport Climbing.

“The Department of Cultural Affairs and Sport (DCAS) encourages excellence and inclusivity. We unite people through sport and culture to ensure a creative and active Western Cape, by using sport and recreation to advance social cohesion. We are pleased to support and acknowledge that the sport of Climbing embodies the purpose of DCAS, which is to optimise social behaviour, through sport and recreation, and to develop competitive school sport in the Western Cape, particularly now as we navigate into and through the sector’s new norm. We are proud of the work that the Western Cape Climbing and Local Organising committee have done to bring the Africa Olympic Qualifying Climbing event to the shores of the Western Cape”, says Minister of Cultural Affairs and Sport, Anroux Marais.

Sport Climbing debuted at the Youth Olympics in 2018 in Buenos Aires, Argentina, where David Naude and Angela Eckhardt, represented the Africa continent. For climbing’s Olympic debut in Tokyo, competitors will compete in three disciplines: bouldering, lead and speed climbing, for one medal. In future Olympics, many athletes hope to see each discipline receive its medal distinction. This Olympic Qualifying Climbing championship will span four intensive days with the intensity of this format being equivalent to a triathlon, incredibly exhausting and taxing on the body.
• Speed climbing tests the speed of the climber on a 15-meter wall competing on parallel routes. The fastest time wins. The current world record is 5.48 seconds.
• Bouldering tests the athletes’ power and technique. An explosive performance on routes (problems) with a maximum height of four meters and safety mats below. The athlete who solves the most problems with the lowest attempts wins the category.
• Lead climbing is all about height, endurance, and strategy. Athletes are secured by a rope on an overhanging route with a six-minute time limit. The athlete who reaches the highest point wins the category.
The ranking results for each discipline are multiplied to determine the overall winner, with the lowest score determining the winner.

In 2015, motivating for Olympic inclusion, the International Federation of Sport Climbing estimated that there were 35 million climbers worldwide with significant annual growth globally. Climbing is a sport that can start as young as 4 years and continue into the senior years. Climbing is an intensely physically and mentally demanding sport that determines strength and endurance.

“The intensity of the competition with all eyes on Africa is a privilege for both the South African Climbing Federation (SANCF) and Western Cape Climbing. Our immense gratitude goes to the Department of Cultural Affairs and Sport (DCAS) and the City of Cape Town who have made this event possible through their financial support. We anticipate keen interest in tourism, once the pandemic subsides, especially for the rock-climbing areas such as Rocklands in the Cedarberg and Montague. The Cedarberg, renowned for its world-class boulders, boasts some of the best boulders and trad rockclimbing routes in the country. The Africa Olympic Climbing Qualifiers will be livestreamed on the IFSC Youtube channel as well as the ACC Youtube channel. We are excited to kick-off international climbing championships in Africa and look forward to welcoming climbers from abroad very soon” says Chris Naude, Chairman of the Local Organising Committee for the Africa Continental Climbing Championship.

The International Federation of Sport Climbing IFSC was created in 2007 and is a continuation of the International Council for Competition Climbing which was created in 1997. It is an Olympic Sports Federation. An international non-governmental non-profit organisation whose main objectives are the direction, regulation, promotion, development, and furtherance of climbing competitions globally. It is also recognised by the International Paralympic Committee. The IFSC fosters links, networks, and friendly relations among its members, their climbers, and officials.

South African National Climbing Federation (SANCF) is the governing body for sport climbing, involving lead climbing, bouldering, and speed climbing in South Africa. SANCF oversees competitive climbing across the country as well as the promotion and development of the sport in artificial climbing environments.

We are a registered NPO (Reg# 130-033) and PBO in good standing with the Western Cape Provincial Sport Confederation and our National Federation.
WCC is affiliated to the South African National Climbing Federation (SANCF) and the South African Olympic Committee SASCOC providing the opportunity for our best athletes to compete at national and international level with provincial or national (Protea) colours. We aim to make the sport as accessible and fun as possible by encouraging a large base of youth climbers and have introduced inter-varsity competitions giving continuity to the competition scene after school.

Climbing has always been a very inclusive sport with men and women of all races, abilities, and ages, climbing as friends alongside each other.