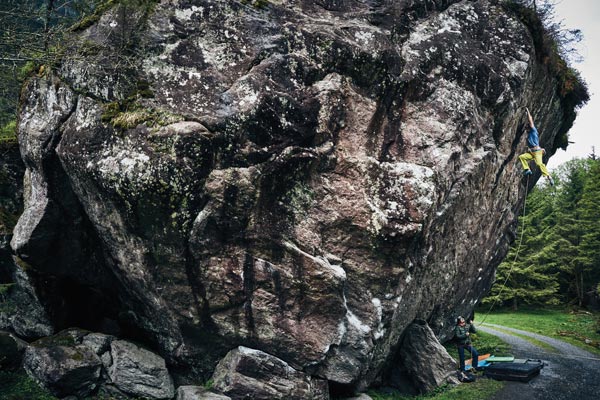 An Accident, the Healing and a Miracle

A moment like many others when you are dedicated to bouldering – while pulling hard on a difficult project in Cresciano, Switzerland, I slipped off the holds, and split seconds later I landed on my crash pad. But this time was different. I landed hard on my back, followed by a backward somersault into the forest’s stony ground. There was only a little pain in my neck, and I went home. I didn’t (want to) think the fall was anything serious, until a few days later when the pain became unsettlingly severe. I visited the hospital, and after an MRI, the doctors explained to me that although I had been very lucky, I none-the-less badly injured the 5th and 6th vertebrae in my spine. A few days later, I couldn’t feel my thumb and index finger anymore. A very funky feeling, for a climber. Hours later, the muscles in my right arm and back (terres major and m. serratus anterior) started vibrating. That was the moment when the brain stopped sending impulses to the muscles. The atrophy started slowly. I knew that I would have problems with sensation on my thumb and index finger until the pressure in the spine went down to a certain level, but I had no idea what that vibrating of the muscles was all about. I just didn’t know what was happening, and somehow I didn’t want to know. Doctors suggested surgery, but couldn’t guarantee I’d be much better afterwards. Needless to say I gave the operation a miss.