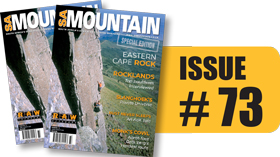 I know it’s been said a million times already, but I’ll say it again – “It sure is a strange and crazy period of the earth’s existence that we are living through right now.”
Who would’ve thought just a few months ago, when we were all climbing freely and happily, enjoying the mountains and planning our trips and holidays for 2020, that we would be in the throes of such a vicious, uncontrollable and locked in environment, with our freedom seriously curtailed, and not been allowed to enjoy the outdoors; to feed our soul and nourish the mind.
It has been a very trying time for all of us, but as I type this, there seems to be a weak light at the end of a possibly very long tunnel. The mountains are opening up again and we are now permitted to go and touch the rough sandstone and feel the earth beneath our sticky rubber soles.
For us at SA Mountain it has been a tough time as well. For the first time in the 18 years that the magazine has been in existence, we have been unable to produce a printed hard copy. The economy has just not allowed it. Plain and simple!
But of course, we did not want to just leave a gap where the June 2020 issue should be, so we decided to do an ONLINE issue for this period. And after some thought, also decided that we would do a “Special Edition” for this unusual time which we are finding ourselves in right now.
So the June 2020 issue is going to be an eMagazine containing the “Best Of” articles and stories and RAW pics from the first 10 issues of SA Mountain – from Issue 1 (June 2002) to issue 10 (September 2004). And to boot, this special issue will feature the same cover image as our inaugural issue – a brilliant shot of climbing at Hogsback in the Eastern Cape.
It has been fun trawling through those early editions of SA Mountain and selecting a bunch of what we think is a good mix of the best. And we hope that you enjoy it as much as we did, and that it brings back some good memories.
No doubt our lives will be irreversibly changed after this ordeal, but I think for the best. We will look at friendships and family through different eyes. And I think that our appreciation for the simple things will be broader, and we will be grateful for a lot more in life, particularly our beautiful mountains, rivers and valleys – they always seem to hold the answers to life’s dilemmas.

Terror and heat exhaustion on a vertical wall can be fun!
By Adele McCann

I Fjord I was a Lemming
By Jeremy Samson