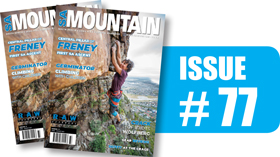 SA Mountain Editorial – Issue 77
Trad is Rad
Is it just me, or is there a definite resurgence in trad climbing wafting around the crags?
Maybe it’s that social media is bringing it more out into the open, but over the last year or so I have seen a marked increase in posts on Facebook and Instagram of guys and gals getting out there and sending trad routes and working trad projects. It’s really heart-warming!
There also seems to be a lot more action on The Ledge, with a lot of the usual suspects doing good stuff there, but also some newer names making inroads into the classic routes up there, and in other lesser-known areas on Table Mountain.
The bigger hills have also received quite a bit of attention, particularly Slanghoek Amphitheatre, where Richard ‘Squeaks’ Halsey and his cohorts – Sam Nightingale and Garrreth Bird, et al, have been hard at work establishing some excellent new hard routes through the centre of the amphitheatre. Much more about this, with killer images and topos, in the next issue of SA Mountain.
Even Montagu is going through a resurgence in trad. Having fairly recently moved up here, I decided to do my best to re-establish trad in the area (after all, this was first and foremost a trad area, before sport climbing took over), so over the past 18 months, with various partners, I have climbed all the existing trad routes on the impressive Cogman’s Buttress, and put up some new stuff. We also developed a new 2-pitch ‘friendly’ trad crag with a mere 10-minute approach walk. The crag is close to the main R62 and has about five routes, with all stances equipped with bolted anchors (hence friendly), so really easy to abseil off back to your packs. All this will be available soon in a new Montagu Guidebook, which will be coming out later this year. The new book will include all the sport climbing, as well as all the trad, and also some long classic ridge routes.
The really big news, however, is that Lost World will be opening its doors again soon. But not as a free-for-all to climb at as you wish, but under some very definite conditions. I have been in talks with the owner, and he has agreed that we can climb there, but only as an organised event. Within the next few weeks, I will put the proposal and how it will work out on our social media platforms, so all will be revealed soon.
Lost World was first discovered over 40 years ago, and fast became one of the premier trad climbing venues in South Africa. It is home to many serious test pieces put up by the legendary Andy de Klerk. The whole kloof has been closed for about 15 years or more now, so the re-opening of this seminal trad venue is pretty exciting, to say the least.
I would encourage you to get your trad game in order in preparation for Lost World, and when you’re wobbling up the run-out and testy Technicolour Darkness, remember that this was opened in 1986, with the gear of the day, and in EBs!

CRACK OF IDIOTS – The story behind the route
BY BILL TUCKER

SAFETY AT THE CRAGS PART 2 – Correct clipping of quickdraws while leading, rope position while leading and sound top-roping techniques
BY TONY LOURENS

PIRATE OF THE CARIBBEAN
by MATTHEW HOLT

BACK PAGE STORY – The User
by TERENCE LIVINGSTON