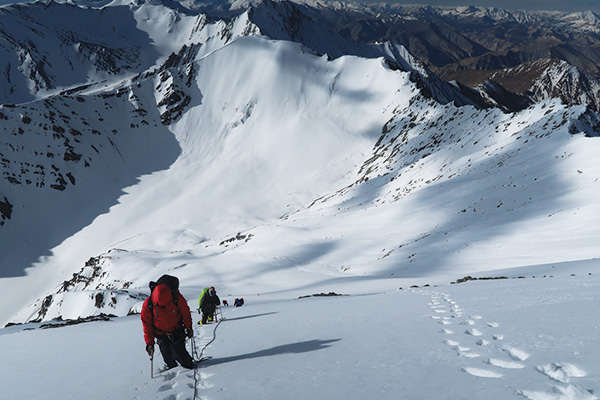 I crawled up a rock step that broke apart in my hands, then waded through a deep pool of snow with the consistency of shaving foam. It was only about 300 metres to the summit, but I suspected we’d soon have to turn back, like the other teams before us that season.

Mandy Ramsden and I were on a commercial expedition to Stok Kangri, the highest peak in the Stok Range at 6,153 metres. The rest of our dozen-strong team were predominantly from northern England, with chopped consonants, blunt humour, and nicknames like Bin and Sponge. Less stereotypically, most were teetotal and vegan.

From our hotel, we looked out at the Stok Range, 20 kilometres southwest. Our target, however, was persistently hidden beneath a bulging black cloud. More worryingly still, the talk in town was that unseasonably deep snow made the peak unclimbable.

We spent several days acclimatising around Leh, largely in cars, driving up the 5,359 metre Khardung La, and visiting precariously-perched Buddhist temples. We were chaperoned by our head Sherpa, Uden, who patiently explained the four noble truths, eight steps to Nirvana and the difference between red and yellow hats. Evenings were spent at roof-top restaurants in the old town, watching televised cricket world cup matches on bed sheets serving as makeshift big screens. After four days, however, this pleasant routine came to an end and it was time to head for the hills.