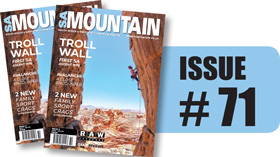 It really baffles me how some people think it’s cool to act like obnoxious, inconsiderate sphincter rings at the crag. What goes on in someone’s head, that they think it is okay to shout (continuously) at the top of their voice to their mates, while supposedly ‘enjoying’ a day out on the hill? So loud that everyone else is forced to listen to their childish egotistical drivel, and in the process, ruin the day for all others. And ninety-nine per cent of the time, this is accompanied by vulgar swearing, with nary a thought for other people and indeed children at the crag. Just this last weekend, I was guiding a young foreign couple at Lower Silvermine Crag where we were subjected to the very loud, conceited and self-centred behaviour of a young man in his early twenties, obviously trying to impress the two young women who were with him. His ‘performance’ was Oscar-winning and totally cringe-worthy, to say the least.
Then there are the smokers! Come on guys, is it really necessary to smoke at the crags? Can you not just hang in there for a few hours before you light up. Is it fair that others have to breathe in your secondary smoke, and again what about the children? It is the height of inconsideration. Basically, I don’t give a fk attitude. NOT COOL!! Again at Lower Silvermine, a young girl was swanning along the base of the crag, sucking on an entjie. I asked her why she had to smoke at the crag, and her answer was, ‘Can you smell it?’ I rest my case. Just so oblivious and inconsiderate.
And the other part of most smokers is they think it is absolutely fine to crush and leave their filthy butts lying at the base of the crag. I was climbing with friends at the Steeple in Montagu a while back, and at the base of the crag, close to the wall, there was a patch that was strewn with cigarette butts, all the same brand! Then on further inspection we did a quick ‘chicken parade’ and collected no less than about 15 butts. This leaves me speechless and at the same time infuriated.
And don’t let me even start with loud music . . .
We go to the mountains to climb, sure. But we also go for many other reasons, and some of those are to do with being in nature and enjoying the beauty, peace and uncontaminated air of the outdoors.
Don’t be the orifice that spoils it for everyone else. Please think about your actions when at the crags. We all have the right to an unspoilt and enjoyable day on the hill.

Be safe in the hills
Tony Lourens

BACK PAGE STORY
Is climbing competitive?
by Mike Scott