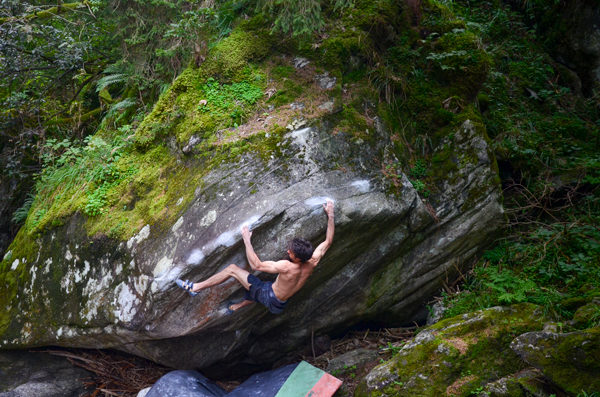 From Niky:
‘Zillertal is a picturesque and marvelous valley in the Tyrolese mountains, Austria. It has been largely developed by Gerhard Horhager and Markus Schwaiger. This valley has got a worldwide reputation during the years, both for bouldering and sport climbing. Despite being a classic destination relatively close to where I live (6 hours drive), I have never had occasion to visit it. My knowledge about Zillertal was very little indeed. I remember I heard news and saw some videos regarding “Incubator” (aka old Jerry’s projekt which was finally put up by Markus Schwaiger in 2003, when I began to climb 😊). This problem is very popular; it’s one of those lines which symbolizes an area as “Mandala” does for Bishop or “Shosholoza” does for Rocklands.

Besides this boulder, I didn’t know that much about this place and, before going there for two weeks with my friend Matteo, I avoided to go through videos and web contents. My intention was to let the real experience playing a wider role which isn’t easy nowadays when you travel to a popular area. Having no virtual expectations/idealization led me to enjoy the first contacts with the area as a really pure impact. This way to approach wasn’t something I chose, but more like a spontaneous thing to do for this trip. Matteo had a guidebook which led us through all the sectors that had already been developed in the past. We really wanted to be there for visiting and getting to know an area which is a classic, but it was “new” for us. Therefore we spent many hours hiking, looking at many pieces of rock and checking lines; our climbing was finally driven by the most inspiring problems; some of them were hidden into the forests, while others settled on the river banks.

During the first evening we came across a riverside prow which seemed to be untouched. This arête, and the location where it stands, had some incredible colors: The turquoise waters of Ziller (the river which names the valley) flows harmoniously through some fair-grey rocks which have been shaped during thousands years of unceasing action. The forest on the back shows their deep shades of green and the smooth granite is covered by some orange/red lichens.

We later found out that we were the first climbers to open this line. The rock took a while to dry well from the moisture of the lichens (I brushed them a bit and then I mostly used water with a simple brush). As I deeply felt I was inside a painting, “Faber Castell” came out to be a spontaneous name to give it.

This video collects the lines I enjoyed the most. Each of them is very different from the other in terms of style, shape, climb, location and history. Considering also the great potential for trad and sport climbing, this valley certainly has many ways through which the climbers can express themselves and their visions.’