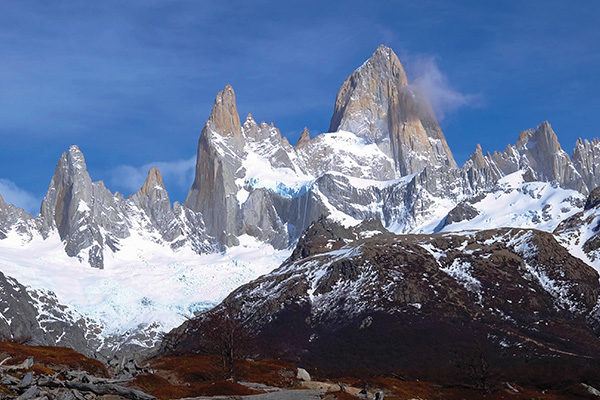 words and pic by Hennie Niemand and Colleen Thiel

The ‘fasten your seatbelt’ light went off with a ping, and I got up to stretch my legs before settling in for the long haul from O.R. Tambo to Guarulhos International Airport in Sao Paulo. Colleen and I were on our way to El Chalten to hike the Fitzroy circuit. After Bob Woods and I became the first South Africans to climb the Messner Direct on the South Face of Aconcagua in 1994, my next objective was to climb Fitzroy. This never materialized, and some twenty years later, here was an opportunity to see her.

Colleen always wanted to go to Patagonia for her own reasons, unrelated to climbing, so when she suggested we go there on holiday, it was a no-brainer. Having done some research on the internet, the decision was made to go in October, just before the tourist season started. Prices are cheaper and there are less people, but the weather is still on the cold side with strong winds, rain and snowfall possible in the mountains.
Our journey started in Cape Town, via Johannesburg, Sao Paulo and two nights in Buenos Aires. From Buenos Aires we took a 3-hour flight to El Calafate. There, we hopped on a bus and, after a two-hour bus ride, we arrived in El Chalten, our final destination for Los Glaciers National Park. El Chalten reminded me a lot of Zermatt in the Swiss Alps with the impressive bulk of Fitzroy towering over the village. The weather was crisp and clear, with a distinct chill in the air. After checking into our hostel, the reason for this distinct chill became apparent with the view of Fitzroy from our upstairs room. Not only was she snow-capped, but there was snow as far as the eye could see. We were so excited to be there, and could not wait to get weather updates to plan our hike to the Fitzroy viewpoint.