Rocklands – A boulderer’s paradise at the tip of Africa 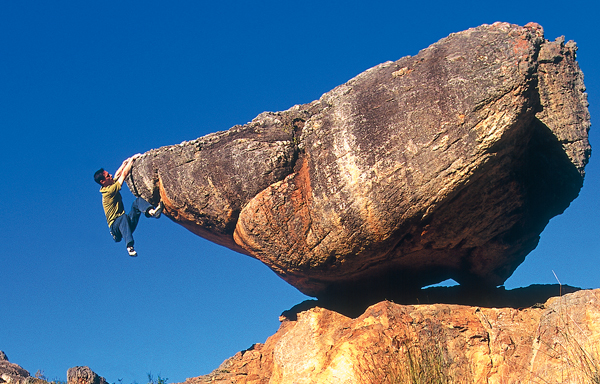 The Quest for The Pure Line – An interview with Fred Nicole, Scott Milton and Bernd Zangerl

Climbers the world over know that Rocklands, tucked away in the mountains of the Western Cape, South Africa, is arguably the world’s most prolific bouldering area. It lies at the northern end of the Cederberg mountains, a range that already offers some of the best trad climbing on the planet and plays host to a number of awesome sport crags. All this only two hours drive from the city of Cape Town.
Rocklands is one of those places that grows on you, whether you are bouldering, climbing or just being there. It has a magnetism that bewitches you. An aura that is almost tangible and rock that goes on for ever.
Every year many boulderers – local and international, make the pilgrimage to Rocklands, on the tip of the African continent, to savour some of the best bouldering to be had anywhere. Some come for the weekend and others make it their home for a month or more.
For quite a few years, Swiss bouldering legend, Fred Nicole has been visiting Rocklands every year. He has been responsible for putting up many of the hardest problems and has spread the word to other bouldering stars across the globe.
This year he returned again and brought Bernd Zangerl, the Austrian bouldering ace and Scott Milton from Canada, who first bouldered in Rocklands in 1996 with Nicole and Todd Skinner.

SA Mountain decided to go out there and talk to these guys, regarded as the best boulderers in the world.