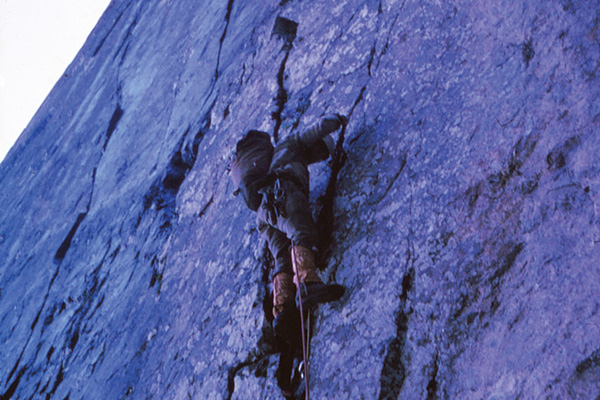 In July last year (2019), during a short climbing trip, I found myself in the Romsdal Valley.
We arrived in the late afternoon and pulled into the viewing parking beneath the famous Troll Wall. I had heard so much about this infamous wall, but nothing prepared me for what I saw. I stepped out of the car and walked to the edge of the parking area and positioned myself so I had a clear undisturbed view of the wall. Quite frankly, I was appalled! What I looked up at was a huge, frightening, dark, dripping, cold, inhospitable wall that put the fear of all the Troll gods into me.
Paul Fatti and his brother Carl climbed this wall in 1970, I thought to myself. I had read Paul’s account in the 1970 MCSA Journal, but it was only now, standing at the foot of the wall, that I fully realized the magnitude of their achievement. It was a truly astonishing piece of climbing and mountaineering, done 50 years ago, with the equipment of the day.
I found out later that they had done the first South African ascent of the Troll Wall and the sixth ascent overall. A real feather in the cap for South African climbing.
This is a rerun of the 1970 article.

The wedge gave a sharp crack as I stepped up into the next rung of my étrier. I froze. Beneath me the smooth wall dropped away to the screes over 300 metres below. Above, the greasy black wall stretched up vertically, vanishing into the overhangs 120 metres higher up. The next piton was still out of reach and I would have to step down to get back to the previous one. But I was too frightened to move, fearing that at the slightest provocation the wedge would snap and send me plummeting downwards. On his small stance below, Carl watched anxiously, hugging the belay close around his waist.
Carefully, I sorted through my selection of nut runners and unclipped one from my waist. Then, with the stealth of a hunter, I stretched up to a narrowing in the crack above. The nut fitted. I gave it a small tug, clipped in my other étrier and stepped into it with a sigh of relief.
It was on this, the first of the four pitches up the Great Wall, that the full seriousness of our undertaking first struck me. Consisting mostly of aid climbing, this section of the route goes straight up for three pitches before traversing out to the left on dubious pitons to an exposed stance on the arête. The Great Wall is considered the most serious section of the Rimmon Route, both because it is so sustained and because of the difficulty of retreat from above it; it is also one of the main features of the diagonal fault line that breaks through the entire height of the Trolltind Wall and which forms the basic line of the route.