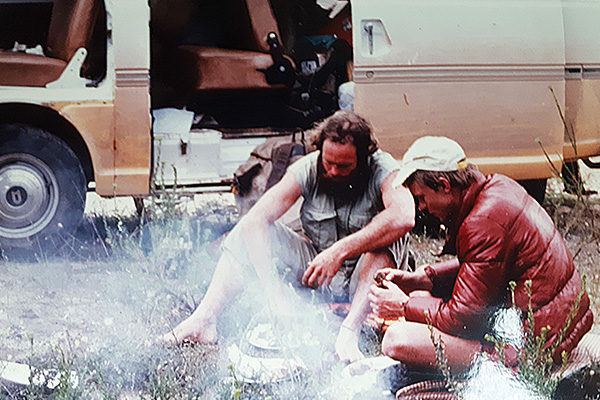 In that lilting-tilting three-minute flight over the area between the Gouritz River in the north and the Attakwas Mountains to the north-east, with the Langeberg Mountains stretching to the west, I confirmed with myself, between stomach rumbles and heady anticipation of a cup of tea and whatnot, that this was indeed the wildest corner of the little Karoo. As the chopper landed in the farmyard, chickens and sheep scattered, and a dog was seen to leap a five-foot-high wall in somewhat frenetic style.

Midday on the vulture cliff – a nest, one of those one-buttock-precariously-on types, with a large hyperactive chick thrashing about, vomiting in my pocket (which had a hole in it). Then, across the gorge, a shout . . .
‘Hey guys!’ (André Boshoff is always polite. None of the expletive raucousness that one would expect amongst climbers). He manages to explain to Bert (Alistair Robertson) and I that the river between us, which we’d swum across hours earlier, was in fact flooding. Tensioning on my jumar, I lean out and look down at the water 200 feet below; indeed, a muddy ominousness about it. The absence of any big rapids in the gorge had caused the river to double its volume, stealthily, unheard.
Bert starts to jumar up the rope so that he can descend the boulder-field to rescue our rucksacks which, according to André, are now only a few feet from the rising water. I don’t envy him the climb back up the 800 feet of mindless, thorn-scrubbed boulder-field. Not to be repeated twice in one day if possible.
A while later, I follow up the rope – a 250 feet jumar on a borrowed 9-mm. The mind baulks, rearranges itself a little at the elasticity of a 150-pound load all those feet down, dangling in space, have launched off the nest, contemplating the grit and the gunge pouring out of the vegetated roof above where the rope is see-sawing through ‘schlorkland’. Twenty-five minutes later I’m at the anchor tree.