On the 25th of May, a team of four hikers: Grant Melville, Ian Shooter, Jeffery Mthabela and Robert Schmidt, set off for the 230 km trek known as the Drakensberg Grand Traverse (DGT). They launched from Witsieshoek in the Free State, venturing into the pristine but cold, wild, and untamed terrain that is the Drakensberg. They took on this adventure with hardly any outside assistance, having their first and only re-supply opportunity two days before the finish line. One step at a time, they summited five of the treacherous, icy peaks along the mighty mountain range. The purpose of this stunning 13-day journey was to raise awareness about nature conservation, and to raise funds in support of the SANParks Counter-Poaching K9 Unit. This unit trains dogs and handlers to deter and track poachers in our national parks, and sniff out illegal firearms and rhino horns hidden in vehicles entering or leaving the parks. These trained K9’s are often the first responders to incidents of suspected poaching activity. 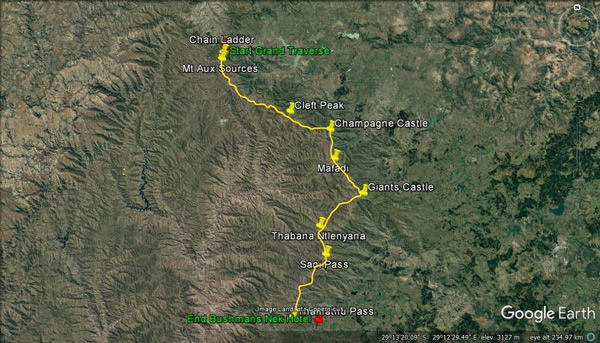 “The SANParks Honorary Rangers in the KZN Region have been supporting the SANParks Anti-poaching K9 Unit since October 2014. I heard about the project in one of our meetings and thought it’s a cause well worth supporting, says Grant Melville. “It combines my passion for hiking and nature conservation and focuses on the positive message that the K9s are making a difference in the war on poaching. The K9s are such inspiring animals and they have really been a game changer in the poaching war in Kruger National Park. The number of rhino poached in the Kruger was down by 20% last year, and the number of arrests of poachers doubled – and the K9s were involved in 90% of those arrests! I’m a keen hiker and love the outdoors and the mountains, and the Drakensberg Grand Traverse (DGT) has been on my bucket list for a while. Finding a gap in my work calendar, I decided to go for it – and actually DO something to contribute in a small way to a greater cause. We can all do something no matter how small or big, but cumulatively it will make a difference.”

How important is training for such a long hike?

The DGT does not require technical climbing skills, but training is important, says Grant. ““I live in Umhlanga Rocks on the east coast, so I can’t properly train for altitude events like the DGT– where you’re hiking at +3 000m above sea level for 13 days. My training included weight training, specifically squats and core strength training, in addition to 30 minutes high intensity on the watt bike every day. To add variety to the routine, I surf-ski or kiteboard when the ocean conditions are suitable. However, no matter how hard us ‘low-landers’ train and how generally fit we are, the altitude and lower oxygen pressure makes a huge difference, and require acclimatisation. So, to properly prepare for a long trek like the DGT, I’d really advise that you put on a backpack and do short hikes in the mountains to get used to that! In addition, don’t shy away from the water! After each days’ hike if we finished by a river, I would take the opportunity to jump into the icy cold water for a quick dip. That’s very therapeutic for aching muscles and sore limbs and you sleep beautifully afterwards.”

Any advice on gear and food to pack on such a long trek?

“On the hike, we were limited by the weight we could carry”, says Grant, “so we brought freeze-fried foods which make quick and easy hot meals when adding hot water, as well as biltong, biscuits, sardines, and cheese. In addition, we carried energy bars, dates, and raisins and of course a few bars of chocolates and coffee.

In terms of gear, do not compromise on good quality gear, especially for longer expeditions in cold climates! Pack a high quality air mattress and sleeping bags for sub-zero conditions, preferably made from goose down. Bring very good boots, thick socks and gaiters, a good quality tent and rucksack, thermal, moisture-wicking clothing and a good windbreaker and jacket, as well as a cap, sunglasses and beanie or a buff. My old boots began to split apart half way, and there wasn’t much else to do but duct tape them together and hope for the best. You cannot carry extra boots on such a hike, we already carried 35kg each. But I asked the support team to bring new boots to the only Re-supply we had at Sani Top – and the new ones which were sponsored by Hi-Tec, were excellent and took me to the finish line. In addition, my air mattress gave in on Day 3 – and so for 7 freezing nights I slept directly on the ground, which was very uncomfortable. Luckily I got a new mattress at the Re-supply, so the last night was a pleasure. A small first aid kit and duct tape for all sorts of repairs is important – I got sun blisters, so sun screen is really important too.”

You summited five peaks, the last and highest being the Thabana Ntlenyana in Lesotho – and we saw from your tweets that you did that alone! Why did you climb alone, and did anything else do wrong during your DGT expedition?

Grant explains: “I got separated from the team on Day 9, and so I ended up a few hours behind them. They went ahead and summited the Thabana and by the time I got to camp I was, in all honesty, far too exhausted. So, I decided to summit Thabana Ntlenyana on my own the following morning, after a good night’s rest. In hindsight and from a safety perspective, this was not so clever – my most daunting moment was probably the hike down from the Thabana Ntlenyana to the Sani Mountain Lodge. I had not eaten since breakfast. There was deep snow and I didn’t know the route, so I was basically lost and running out of energy. You have to summon mental strength in such situations! Luckily, I saw a flock of sheep and thought “there’s got to be people with them.” I found a friendly Basotho in a small rondavel and even if we couldn’t speak each other’s languages, he understood my predicament. Without hesitation, in his gumboots and blanket, he picked up my rucksack and guided me straight to the Lodge without stopping for a moment – I battled to keep up with his pace! It’s amazing how fit and friendly these sturdy people of the mountains are – and all he asked, when I finally got to the Lodge and a waiter helped me translate, was a packet of cigarettes!”

What would you do differently if you had the chance – during preparation or on the expedition itself?

“We were well organized and prepared but I would have been more thorough with my equipment preparation – that slow leak from my hiking mattress really made for miserable nights! I tried to keep mentally focused on the day ahead – and sometimes when lumbering through deep and deceptive snow, only the step ahead. Only three of us continued after the Re-Supply stop. None of us had done the route from Sani Top to Bushman’s Nek before, and we somehow lost our map. Getting lost is very easy in the mountains! We ended up in a gully and had to climb down a steep cliff to avoid a 5km detour…that was a challenge….and also cost us time, so we didn’t get to the finish line until after dark. It was a bit harrowing to rush down the last pass with only a headlamp as light, not knowing if the SA border post was still open. Luckily SAPS was very cooperative and we got to the end. But I would have added an extra day onto the expedition to make it 14 days – the last two days where we covered 42km was just too strenuous!”

Have you got any follow-up expeditions lined up for the near future?

“I have begun contemplating a long distance solo surf ski expedition,” says Grant “from Mozambique down the South African east coast next year, to bring awareness to the ocean pollution issue and the overfishing of marine resources on our South African coastline.”

Is it still possible for people to donate to the cause? How can people get involved?

Absolutely, yes! People can donate directly to our secure campaign page: https://www.givengain.com/cause/2552/campaigns/17669/ or to SANParks Honorary Rangers NEDBANK account no. 1585 392 448, Branch code 158550. Make use of the following reference: “your name.KZN-DGT.K9” to enable us to keep track of contributions and send a copy of your deposit slip to ClimbforK9@gmail.com. All contributors will be acknowledged on our Instagram and Twitter pages; and we’re happy to promote companies that donate to the cause!

All pics courtesy of Climb for K9

Mountains are made from rocks